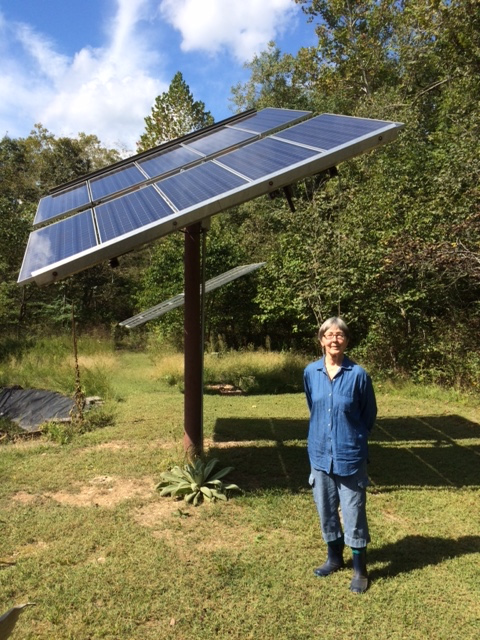 Carroll County resident Pat Costner walks under her three solar arrays this warm autumn afternoon to a shed where she keeps a collection of heavy-duty batteries.

“They’re fully charged right now,” she says, gesturing at the noontime sun above our heads.

“It tells me if I am buying or selling,” she says. “Today is a selling day.”

We follow a stone path back to her ultra-energy efficient home. Along the way Costner reveals she’s invested $30 thousand dollars over the past ten years to build her 3.3kW solar complex, the first for Carroll Electric.

“They sent truckloads of men to come out and look at my system,” she says. “To poke at it.”

Currently more than 40 states allow net metering, and surcharges have been proposed in a dozen, but only a handful of states have implemented them.

Tyson Grinstead with the Alliance for Solar Choice, a leading rooftop solar advocacy group and a party to the Commission’s net metering docket, says net metering benefits even non-metering customers and referred to an independent Mississippi Public Service Commission study as proof.

“Their major finding was that net metering put a downward pressure on rates for citizens in Mississippi,” Grinstead says.

When energy demand peaks during extreme heat or cold, utilities have to purchase additional power at higher rates to compensate. The Mississippi study also found that distributed energy from solar energy systems tied to the grid may reduce wear and tear on electrical transmission facilities caused by fluctuating demand.

“The meetings will be a mix of informal technical conference calls and in-person gatherings,” he says, “Members will consider the current rate structure and whether or how it needs to change to be in compliance with Act 827 to ensure that net metering customers will pay the cost of serving the rate structure. The calculation of that cost will also consider the quantifiable benefits that net metering customers will provide.”

Until then, clean energy enthusiasts and entrepreneurs worry small scale residential and commercial solar development in Arkansas will stall out. Jordan Haas is a representative with Solar Energy Arkansas, which designs solar systems for businesses and industries.

“We have 6 megawatts of customers in cue right now waiting for clarification on net metering.”

Haas, and others say the cost of solar photovoltaic equipment has become much more affordable in recent years, with quicker returns on investments due in part to the absence of monthly surcharges and net metering credits.

But if Arkansas utilities are permitted to impose monthly fees, Haas and others say adoption in the state will dim.

The Arkansas Public Service Commission hosted a day-long public hearing Tuesday on net metering, the industry term for people and businesses who generate their own electricity, typically through photovoltaic solar systems, and push that power back onto transmission lines.