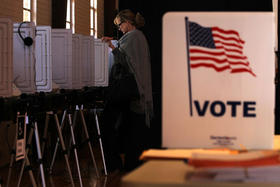 One of three Legislature-sponsored ballot issues this election is a proposed constitutional amendment “concerning the terms, election and eligibility of elected officials.”

The proposed constitutional amendment in Issue 1 would primarily extend terms from two to four years for certain county elected officials. Those affected would include sheriffs, county judges, assessors, clerks, treasurers, coroners and surveyors. Supporters of the proposal say under the current two-year terms, incumbents devote too much time in campaigning for office. And Baxter County Sherriff John Montgomery says that time could be better spent on performing necessary administrative duties.

“When you have to run for office every two years, basically you’re running for office for a year and then you’re in office for a year. And so it’s very disruptive to the office. It’s disruptive to the employees in that office and I think it puts a tremendous extra workload on those folks. In the case of sheriff, obviously we’re dealing with public safety, so many times when we’re out campaigning, we have to drive separate vehicles, we have to respond back to emergencies 24/7. So it’s very, very cumbersome,” he says.

Montgomery is the director and chairman of the Coalition for Election Reform, a committee supportive of Issue 1. Committee member and Pulaski County Treasurer Debra Buckner says the current two-year terms give rise to instability.

“If we need new software, but we’re not going to be in office long enough to see it implemented and the cost efficiencies realized, it’s difficult to take bold steps to do better governing because we may not even be here to complete the task,” she says.

Issue 1 also clarifies the state definition of what’s called an “infamous crime” to being a felony, abuse of office, tampering, or a misdemeanor offense of deceit or fraud, or misdemeanors relating to the election process. An infamous crime conviction prevents electability to office in the state.

The clarifying language on infamous crimes was partly brought up after the Arkansas Supreme Court ordered in 2013 that a former Searcy County sheriff be removed from office for an infamous crime because he was once convicted of stealing chickens as a young man in 1979.

The proposal also stipulates that certain county candidates who run unopposed for their seats would not have their names appear on the ballot. Supporters argue this would save money in the election process by not having to staff poll workers or print unnecessary ballots in some cases.

Finally, Issue 1 also prohibits county elected officials from holding another civil office—like the positions of city attorney, alderman or a place on some governing board or commission. Buckner calls this provision an ethics reform.

“Having public officeholders being appointed in civil service positions, there’s always that hint or possibility—and frankly history has shown us—of conflict of interest,” she says.

One opposition committee is Arkansas for Free Enterprise, formed by the conservative advocacy group Conduit for Action. Brenda Vassaur Taylor, a Fayetteville-based tax attorney, directs both groups. She pushes back against the argument that two years is not enough time to carry out essential duties in county roles.

“Anyone can look at the job descriptions of these county officials—not that they’re not significant—but they don’t rise to the occasion that you need four years to figure out your job description and do a good job. Government that’s close to the people is always going to be the best government,” she says.

Vassaur Taylor considers the current two-year terms necessary for holding officials accountable. She also challenges the idea that county officials spend too much of their time campaigning.

But Buckner counters that any accountability concerns should be weighed against the efficiencies that could result from longer terms.

“Are you going to have a bad apple from time to time? Well of course. There are bad apples in every profession. But on balance, in today’s world of technology and the rapid pace, it just makes sense to gain some stability at the local level,” she says.

Arkansas for Free Enterprise has not begun an extensive campaign against Issue 1. The committee in support of the measure, the Coalition for Election Reform, has raised a little more than 23,000 dollars, but has mostly spent it on legal, accounting and consulting fees, according to the latest documents filed with the Arkansas Ethics Commission.