Arkansas’s Legislature took a step toward its pledge to trim $835 million from the state’s Medicaid budget over five years today when it voted to limit group therapy for about 10,000 low-income Arkansans from 90 minutes to 60 minutes, 25 times a year.

On its face, not too draconian, but the hitch is that some of that money was helping fund residential facilities with round-the-clock monitoring for a population often called “Act 911,” about 1,000 people who would have been convicted of crimes but pleaded mentally unfit.

Diane Skaggs is director of the Mental Health Council of Arkansas, the group operating these “lockdowns,” as they’re commonly called.

“Don’t just look at numbers and say this is a problem and cut it and look at what it does to our most vulnerable clients.”

But state Rep. Charlie Collins (R-Fayetteville) says looking at numbers is exactly what he and his colleagues should do, if they’re to serve the most Arkansas taxpayers.

Skaggs would point out that those states with much lower group therapy budget lines have per diem rates, intensive day treatment and other funding options through Medicaid. Arkansas providers don't have access to those funds.

Group therapy-coded dollars are a substantial portion of the Mental Health Council of Arkansas’s budget, and Skaggs says these lockdowns won’t be able to stay open. She doesn’t know where the residents will go, and that prospect brings to her mind the last move the Act 911 population made a few years ago out of the state hospital and into the lockdowns, following a federal lawsuit.

“The chronically mentally ill don’t go away. Seriously emotionally disturbed children don’t go away. So that, to pull this at, well, yanking it, basically, out from under people means that it will come out in another area, such as emergency room visits, hospitalizations, and unfortunately, jail.”

An estimated 30 percent of Arkansas’s prison population suffer from mental illness, and that’s the fastest growing percentage in the nation, but there’s another population that will be impacted, and they are the quietest constituents in this conflict. 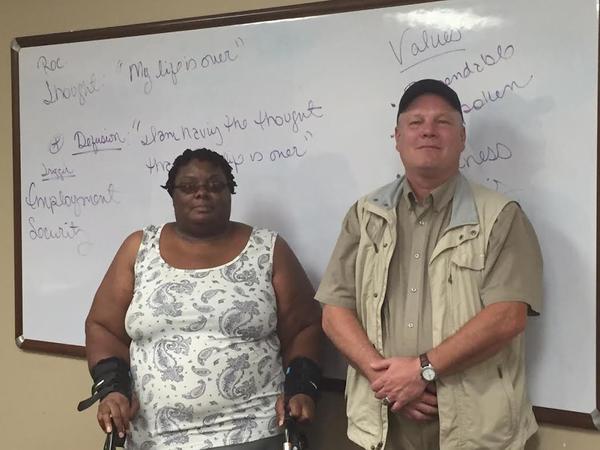 Shakica Washington is a regular Medicaid patient with mental health issues. She attends the weekly group therapy at the Little Rock Community Mental Health Center, and was there roughly 24 hours before the Legislature’s vote.

“My question, I’m afraid to get to where I was before where I wanted to end my life.”

John Pine is in Shakica’s group and said this by way of support, “You kind of have to fight through the depression, and hope where you come up with a healthy thought.”

Lisa Evans is the director of the Little Rock center whose group classes, focused on life skills, will now be shortened from an hour and a half to an hour.

“Group psychotherapy in particular is something that’s very effective and efficient for delivering … treatments that we know are effective for multiple diagnoses. We have a lot of people here in Little Rock and in Arkansas who need mental health services, and it’s hard to do that one at a time.”

So, Evans believes the spending is justified, but Collins says something in Medicaid has to go.

Collins says if a particular patient needs more help, providers can request extra for them, bringing accountability to care. Advocates say they’re all for rooting out fraud, but their spending was already scrutinized by state-contracted auditors.

A further cut to the hourly rate for group therapy, from $13 to $10 an hour, will be reviewed after a 30-day public comment period.

Funding cuts for mental health services through Medicaid are taking effect October 1, despite a last-ditch effort at the state legislature Friday to walk back a change that some say could have dire consequences.

The cuts, finalized last week, would limit group therapy length from an hour and a half to an hour and set a cap of 25 counseling visits per year for Medicaid recipients who might otherwise go every week.

The vote to revisit the decision failed to gain two thirds from the Arkansas Legislative Council Friday morning.