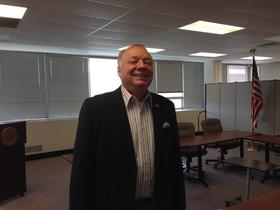 The Democratic Party of Arkansas is alleging that a Jefferson County election official intimidated voters at an early voting site in Pine Bluff.

At a press conference in the state Capitol Rotunda, Burks said Victor Johnson was prevented from voting and at one point Soffer told Johnson to “shut up and go home.”

“This is deeply troubling to the voters of Jefferson County and also to the election administrators whose job it is to administer the elections free and fair from interference and intimidation,” Burks said as he was joined by NAACP Arkansas President Dale Charles and Jefferson County Democratic Party member Michael McCray.

Burks alleges Soffer also stood in the doorway of the voting site to prevent voters from entering.

“We’re not sure at the present moment how many voters were prevented from voting that day or how many votes have been challenged. We don’t think it’s too many.... we caught and stopped this soon after it happened. But it is deeply concerning to us that voters were challenged,” Burks said.

The lawsuit also comes after Soffer last week raised questions about the placement of voting machines at the site and about compliance with the Americans with Disabilities Act. The lawsuit contends that because of his position as a Republican on the county election commission, it is a conflict of interest for Soffer to be a poll watcher who can challenge voters.

When reached by KUAR, Soffer did not want comment on the allegations, aside from calling the press conference “a publicity stunt by the usual suspects.” Republican Party attorney George Ritter said he is still evaluating the lawsuit and also couldn’t comment further.

Soffer was also the defendant in a Freedom of Information lawsuit filed earlier this year. He was found not guilty.