At the 104th commencement for Central High School, more than 600 graduates formed two lines and marched through the bowels of Verizon Arena. The crowd inside the stadium filled all of the lower bowl and much of the upper.

On stage sat not a single elected representative of the local school district. For the second commencement in as many years, the city’s schools are being managed by the state and Education Commissioner Johnny Key.

The superintendent giving tonight’s address is not the same man who this week met with senior administrators to begin planning for school this fall.

Four, actually. On his first day of high school, Morris Holmes was the superintendent. That May, it was interim Marvin Burton. The following May, Dexter Suggs. And, this night, Baker Kurrus. 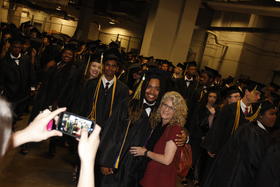 Next month, the superintendent will be Michael Poore.

The state took over the school district halfway through Kolluru’s junior year.

Fellow honors graduate Samantha Fish said she considered protesting. “When all the protests were going on, I really considered going down and doing that, but … I had homework.”

Other students said the tumult in the district didn’t dramatically change their high school experience. To them and Fish herself, Central ran the only way Central should. Going forward, though, “I would hope we would get more compassion in the bureaucracy of the school district because right now it really seems like people are trying to run the school system like a business and the children like a commodity,” Fish said.

Doug Stavey, an algebra teacher and a coach, said Central High School Principal Nancy Rousseau actively tried to shield the students from the instability in the administration of the district. To his mind, it didn’t change students' morale – “Teachers, on the other hand ….” 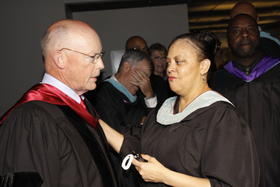 At the front of the graduation cortege, Kurrus visited with students and staff. When he came aboard to lead the district, many former school board members and parents crowed about Kurrus and the autocracy being forced upon the local school system by the state. Today, the hue and cry is on Kurrus’ behalf.

“You know, this district shouldn’t vest its future on the shoulders of any one person. Never. Not ever. Stability is important for parents. Students are flexible and resilient and, of course, concerned I’m sure, but on the other hand, we need stability for enrollment and parental decision making as much as anything.”

NEW KID IN THE HALLS

Thursday, in the parking lot of the district’s administration building, the newest superintendent, Michael Poore of Bentonville, handed his wife the keys to their new apartment in Riverdale. She’d not yet seen the place the two will call home until they can find an actual home. 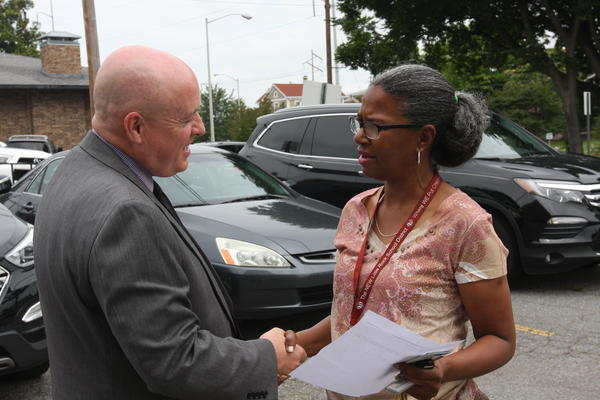 “You know, the number one challenge that’s kind of been presented to me is how can I as a leader help this community get back so that it truly is functioning in a local control-type setting.  And, in reality, there’s the obvious thing that caused local control to be taken away, and that’s academic performance among some schools," he said.

"But right along with that, and I think Mr. Kurrus, the current superintendent, would agree with this: you also have to manage the fiscal end of the Little Rock School District, which is a shifting environment as Deseg money will end. You know, that’s $37 million the district is used to receiving year in and year out, and all of a sudden that’s gone. ... There’s the challenge right there.”

Inside an empty boardroom, since he doesn’t have an office, he says his welcome so far has been a good one. He has an entry plan – the “Superintendent’s Listen & Learn Entry Plan.” It’s everything from meetings to mass mailings to something called a “Ten-a-Day” phone communication outreach. That includes phone calls to students in the district.

Poore said a recent Education Week piece suggested the success rates of school districts after a state takeover “is not great, just to be real honest with you, looking at statistics across this nation. It’s hard to do things to make it so that the district is performing at a [high] level, and you move away from state control and that kind of thing. And I’m intrigued by trying to take this on and the opportunity there.”

WHEN THE GLORY COMES

Inside Verizon Arena May 26, Kurrus said he’s not sure what’s next for him. He is sure this will be the last graduation speech he makes to a Little Rock high school. 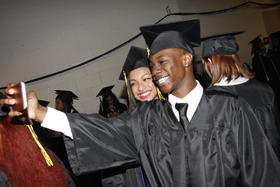 “None of us will pass this way again,” he told the graduating seniors, this time from the stage. “ … So we have something in common – we’re both moving on."

Then he gave them what every Verizon crowd has come to expect, an encore.

One day, when the glory comes

It will be ours, it will be-e-e-e ours

Oh, one day, when the war is won

We will be sure, we will be-e-e-e sure