A contingent of about 20 Arkansas activists gathered at the State Capitol Tuesday to voice solidarity with North Dakota Access Pipeline protesters as they challenged the newly approved Diamond Pipeline. The 440-mile pipeline is to go under construction across Oklahoma and Arkansas.

At the rally, Denise Parkinson of Hot Springs said recent seismic events in Oklahoma and the pipeline’s proximity to waterways is a concern. 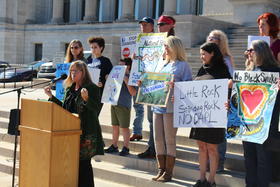 “We are asking today for a review and a reevaluation of this entire plan, because the Diamond pipeline was approved before the current state of earthquake emergency in Oklahoma. Cushing, Oklahoma is the epicenter of a large earthquake swarm being felt all along the Diamond Pipeline route,” she said.

Parkinson implied that possible earthquakes could imperil the safety of the pipeline and make it prone to spilling.

The estimated $900 million Diamond pipeline is a joint project of Houston-based Plains All American Pipeline and the Valero Corporation. It’s expected to carry 200,000 barrels of crude oil a day from Cushing to a Memphis, Tennessee refinery. The Arkansas Public Service Commission and the U.S. Army Corps of Engineers approved the pipeline in August.

Many protestors drew comparisons with the fight against the North Dakota Access Pipeline, DAPL in Standing Rock, North Dakota—a sacred area for the Native American Sioux Tribe. Over the past several months, thousands of protestors have gathered at the site in an effort to halt pipeline construction. Thursday was a national day of protest over the DAPL.

Caren Thompson, a Little Rock attorney who traveled to Standing Rock to be a part of the protest, also spoke against the Diamond pipeline.

“What they’re doing [in Standing Rock] is sacred,” Thompson said of the protestors she met. “They’re water protectors. And that’s what we are. We have to protect our water. It’s life... That’s not some silly phrase.  It’s true.”

In keeping with a theme of protest criticizing the desecration of native grounds, some activists noted that the Diamond Pipeline, which will pass through 17 Arkansas counties, intersects a several points with the Trail of Tears. Theysaid it points to a further disrespect of Native Americans who made the arduous journey through Arkansas to reservations in Oklahoma in the 19th century.

"It's going to kill them again," said Skip Smith of Little Rock, who cited the Cherokee origins of his great-grandfather.

Jerry and Mary Newton of Lake View, Arkansas made the 1,700 mile trek to Standing Rock in September to donate blankets and first aid supplies to the protestors.

“It was overwhelmingly calm, spiritual, friendly. It was the most amazing experience. I wish we could have stayed longer. I really do,” said Mary Newton.

“It was a spur of the moment thing. We felt such a calling to go,” she said after the rally.

Although their stay in Standing Rock lasted only one day, the Newtons returned to Arkansas with a newfound activist spirit, leading them to research the Diamond Pipeline project.

In his remarks at the rally, Jerry Newton criticized Arkansas’s eminent domain laws, as well as other aspects of the process for the Diamond Pipeline’s approval.

“I don’t know if we can stop it. We’re going to give it a hell of a shot. But I know we can some things with the legislation that can prevent it from happening in the future,” Jerry Newton said.

The Newtons wrote to Arkansas’s congressional delegation, including U.S. Senators John Boozman and Tom Cotton, to protest the project. But they said the senators were generally supportive of the pipeline.

The Diamond Pipeline is to cross the Arkansas, White, St. Francis and Mississippi Rivers. Fifteen permanent and 1,500 temporary workers are expected to be hired during construction, which is set to complete in 2017.