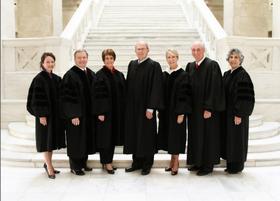 Should the seven justices on the Arkansas Supreme Court be elected? That’s been a central question of the Arkansas Bar Association’s 81-member House of Delegates for much of this year. The group, made of lawyers from around the state, will meet in December to decide on approving a proposed constitutional amendment drafted by a Bar Association task force that would create an appointment system for the justices.

The proposal comes after this year’s races for two state Supreme Court seats ended up being the costliest in Arkansas history. Outside groups with undisclosed donors ran attack ads reminiscent of partisan politics.

Discussions about a new system for selecting state Supreme Court justices began taking place among the House of Delegates earlier this year, according to Bar Association President Denise Hoggard.

“The House of Delegates wanted to be more proactive in looking at how we select justices and how we insulate our courts from the politics of partisanship,” Hoggard says.

The Bar Association and its former president, Eddie Walker, formed the Task Force on a Fair and Impartial Judiciary, which researched judicial systems in other states and arrived at recommendations which eventually took the shape of the current draft amendment.

The Bar Association’s plan would:

-Allow the governor to make an appointment to the Supreme Court based upon the three names recommended by the commission.

-Extend a justice’s term to 14 years, instead of the current 8-year terms. The justice would then have to retire from the court when the 14-year term ends.

Even if the Bar Association House of Delegates gives final approval to the draft constitutional amendment, they’d have to find an Arkansas lawmaker to sponsor it. The legislature would then have to approve it and the state’s voters would have to pass it in a general election for the amendment to take effect.