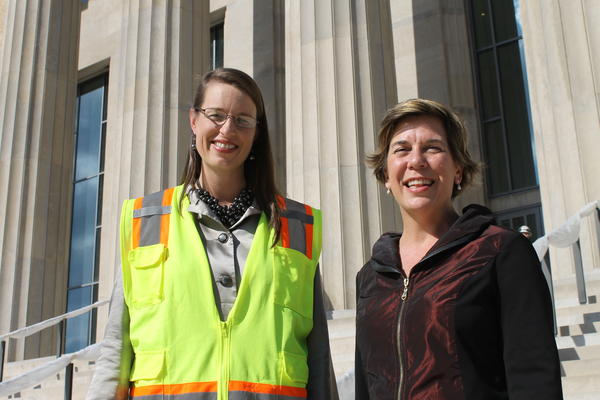 Free tickets will be handed out Tuesday at 10 a.m. on the steps of the newly renovated Robinson Center in Little Rock for a thank you concert later this month by the Arkansas Symphony Orchestra. It comes as final work is being done before next week's grand reopening and ribbon cutting ceremony.

Standing in front of the building with its large columns, Gretchen Hall, president and CEO of the Little Rock Convention and Visitors Bureau, noted, "We’ve still got a lot of work to do and the crews are working around the clock and we’re going to hit that November 10th deadline and we’re very excited about turning this project in on time." 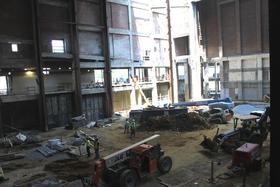 Work on the facility, which is owned by the city, began on July 1, 2014. Since then the building has been completely gutted to its concrete and steel shell, then rebuilt. It now features a glass entrance facing Broadway, and a conference center on the roof facing the Arkansas River.

There have been no major problems during the renovation, Hall says, other than what would be expected with a structure that first opened in 1939.

"Everything from, 'oops that foundation pillar doesn't appear to be in the exact location that it is on the blueprints,' to other structural challenges, once we got in and as we cantilevered over La Harpe (Blvd.), and then all of the electrical, sound and acoustical elements inside that performance hall, just a lot of little stuff in order to coordinate the installation and the building of this performance theater."

Still to be completed is a fine tuning of the performance hall to get the best possible sound.

Christina Littlejohn, CEO of the Arkansas Symphony Orchestra, says there are many variables, like panels on the walls that can be angled in different ways, or the orchestra shell can be moved forward, back, or completely removed, "or even the ceiling panels can be tweaked at just slight different angles, and even that alone will change how the orchestra blends."

She says the symphony was pleased to be involved in picking the acoustician for the renovation, firm JaffeHolden, which has worked on projects around the world. Before the first public performance, Littlejohn says those involved will come together to carefully study the sound and how it can be modified.

"We'll actually have a very special acoustic rehearsal with the orchestra. We're going to be testing the pit, and we're testing what the orchestra would look like with a possible chorus because this hall can be tweaked a little based on who's on stage, if it's a solo trumpet, or if it's an orchestra with chorus, or if it's a ballet with us in the pit," Littlejohn said.

The ASO is moving into its 50th season and Littlejohn says after three years away, they’re excited to be returning to Robinson.

"This will be an entirely new experience for anyone to hear the orchestra in Robinson after the renovation. You're going to hear it in a whole new way. It's a much more intimate space."

A key part of the renovation was moving the stage, says Hall.

"We dropped it 36 feet down to the La Harpe ground level, so the facility itself is much taller. However, we put in a metal coil ceiling in order to shrink that a little bit so that visually, it doesn't feel as tall, but we've got a full catwalk system above it for lighting and theatrics, so for sound purposes you'll get the full height of the hall, which you need," Hall said. 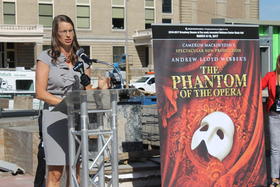 The renovation also means that Robinson will be able to host traveling shows like "Phantom of the Opera," which will be featured in March, that weren't possible in the past because of limitations.

The $70 million renovation has been funded by a two percent tax approved by Little Rock voters in 2013. Hall says it's on budget, "down to the last penny, but the final budgets and all of the close out won't actually happen until January, but we're looking and tracking right where we thought we would be."

A grand reopening press conference and ribbon cutting is set for Thursday, Nov. 10, featuring Arkansas Gov. Asa Hutchinson, Little Rock Mayor Mark Stodola and other officials. The ASO's annual Opus Ball fundraiser will take place in the new Robinson Center Grand Ballroom on Saturday, Nov. 12. Then the orchestra will host its free show on Wednesday, Nov. 30  to celebrate completion of the project.

Tickets for the show will be given away at 10 a.m. on the steps of Robinson Center and each person is limited to four tickets. No phone orders or online tickets will be available for that event. If any tickets are still available, they can be picked up starting Wednesday at 9:30 a.m. at the ASO’s administrative offices in Byrne Hall at 2417 North Tyler Street in Little Rock.

UPDATE (2:27 p.m.): The Little Rock Convention and Visitors Bureau reports all tickets were picked up within 45 minutes by people who lined up in front of the venue.