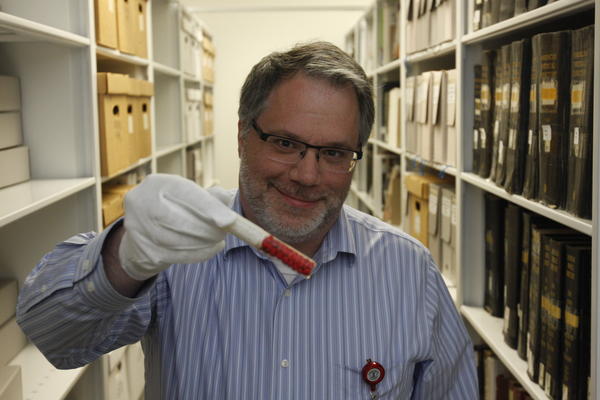 Housed deep inside Education Building Two on the University of Arkansas for Medical Sciences campus is the state’s only dedicated repository for medical history, devices and photographs, and physician’s personal papers.

This is the vaguely named Historical Research Center, and its archives and artifacts are up five stories, just beyond a wide wall of glass accessed by a thin skywalk open on either side to a leg-shattering fall. The skywalk starts at the doors of a single passenger elevator not wide enough for one fat wrestler delivering two wedding cakes.

“It was located on the second floor of the library sort of back in a staff area,” says Tim Nutt, its director. “You know, researchers came in and utilized materials, but it just wasn’t as open and inviting as the space we’re standing in right now.” 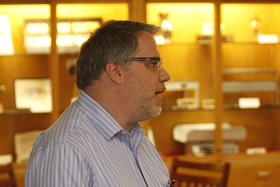 Created not long after the building itself in the late 1970s, the Center houses about 500 linear feet of materials that includes the institutional records of UAMS, the records of the county’s medical society going back to 1869, the papers of U.S. Public Health Service Dr. Oliver Wenger (which includes a trove of papers pertaining to the 1920s-era venereal disease clinic in Hot Springs) and about 6,200 books in the history of medicine collection.

Dr. Sam Taggart, a retired physician who wrote The Public’s Health: A Narrative History of Health and Disease in Arkansas, has made much use of the oral history of nurses (the Center has the records, too, of the Arkansas State Nurses Association). About the Center, he says, “it’s the Mecca of historical research in Arkansas.”

Nutt was hired at the start of the last school year to raise the profile of the Center and aggressively pursue new acquisitions.

“Well, I can’t really go into that until all the deals are finalized.”

Nutt is a more recent vintage of the German Catholic Nutts who settled New Dixie just outside Bigelow. His roots go back to his great-great-grandparents, who arrived there in 1880. 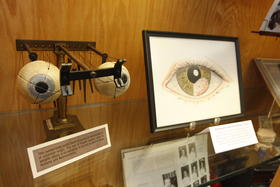 “In my lifetime of working in Arkansas history I have never met anyone with greater capability than Tim Nutt,” says Tom Dillard, himself a long-serving, high-volume purveyor of said commodity.

A few years ago, when there was an opening at the very top of the heap of full-time historians – state historian – some in the chattering classes bandied Nutt’s name about. (The job went to Lisa Speer.)

No matter. Nutt’s game is on the ground, among the mossy and forsaken, the cobwebs and the catacombs.

He just means there have been some missteps in the pursuit of primary-source booty. For instance, there was the abandoned final dwelling of one Florence Price, a Little Rock transplant who became perhaps the most accomplished black female composer of pre-Civil Rights Era America. He wasn’t sure the moldering floorboards wouldn’t give way and send him into a netherworld. 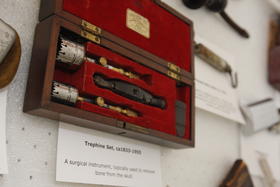 More recently he pulled back the curtains at the historic Malco Theater in Hot Springs and sifted through the very first submissions to the Hot Springs Documentary Film Festival a quarter century earlier. He also packed up the three Reagan sisters house (not those Reagans, but Mary Sue, Betty Lynn and Agnes (Lytton) for whom Reagan Elementary is named) in Rogers in 2014; it “was filled with rare Arkansas titles, documents, letters and even a bookcase owned by a famed attorney.” 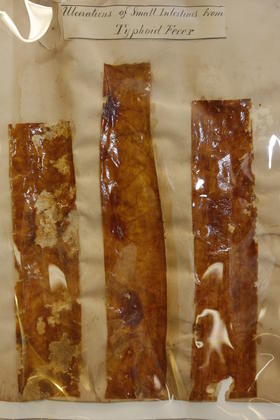 Inside the public reading room at the Center, Nutt flips through the pages of Dr. Edwin Bentley’s medical scrapbook, the one with the shellacked entrails of corpses who, perhaps suffering more urgent morbidities at the time of death, nonetheless demonstrated intestinal maladies. One page, “Ulcerations of Small Intestines from Typhoid Fever” features three strips of petrified human intestines that look not unlike thin-sliced bacon.

To be clear, the Center is mostly a store of papers, photos and illustrations compiled over more than 150 years of medical practice here in Arkansas, but some of the collection is “three-dimensional.”

Nutt’s aim is to raise the profile of the Center by becoming more active in historical societies, identifying possible new acquisitions and digitizing the current library.

As we talked, new University of Arkansas graduate Caitlin Beasley poured over a file marked “Russell Family Letters,” an epistolary history by and about young Ava Russell, mostly to her future husband, a “Mr. Norwood.” Ava Russell’s father was a traveling physician who later profited from the sale of bottled Eureka Springs water.

Beasley, 22, won a $1,350 grant from the Society for the History of Medicine and the Health Professions to pursue this research into Eureka Springs, a city founded (in part) on its boast of miraculous waters bubbling up through the mountain karst. These waters could heal people, after all, “and before they really knew what caused disease, that was pretty plausible.” 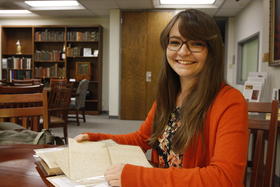 “Originally, it was mostly poor people” who flocked to Eureka Springs. “It was a really underprivileged class that couldn’t afford physicians care, so they came and bathed in this miraculous water.”

But by the turn of the 20th Century medical science shifted, from a diverse epistemology to germ theory, the credible hypothesis that many illnesses and diseases are caused by microorganisms inside the body.

With that, the marketing of the town shifted.

“Now they were trying to appeal to the rich, the people who had a [diagnosis] that came into popular imagination in the late 19th century called neurasthenia, which was like nervous illness.”

This was the educated class with the means to retreat for weeks and months.

“They depleted all their nervous energy and needed to go on a vacation. So, conveniently, [Eureka Springs] kind of jumped on that bandwagon when it couldn’t claim [the waters] were miraculous anymore.” 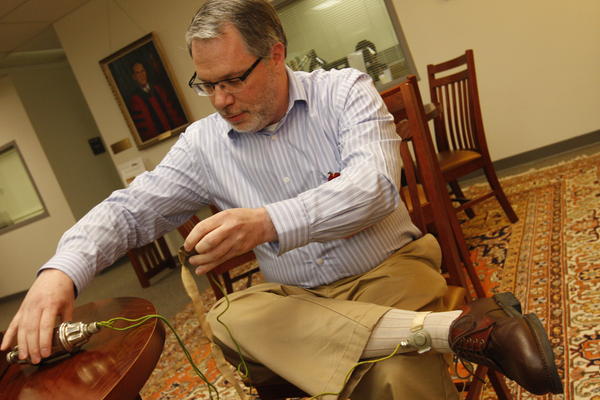 One needn’t show proof of a grant award or be enrolled at UAMS to enjoy the library, Nutt says. “We’re always open for people to come up for tours,” and he’s happy to be pulled away from his desk.

“We will put down the drawbridge and make sure there are no alligators in the mote.”