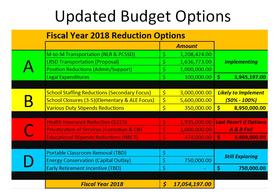 Poore told reporters that five schools—Carver, Franklin and Wilson Elementary schools, the Hamilton Learning Academy and Woodruff Pre-K center may either close or be repurposed. Poore cited low enrollment at some of those campuses and low student counts in their surrounding board zones.

“We have to go ahead and reduce our budget based on the things that have been taken out of our existing resources, which is the deseg money. But we also need to be of consideration to what we’re going to be as a district over the next three years.”

Poore said the district will also cut transportation and administrative costs, with the possibility of some staffing cuts. Little Rock Education Association President Cathy Koehler agreed many of the cuts are necessary, especially as the district competes to retain students with the growth of charter schools in the area.

“So we have a choice we can either go hid in our shells or we can come out...and be competitive and we can offer something to our students that is better than they can get anywhere else and that can help them with their growth,” she said.

Poore said he still wants a new Southwest Little Rock high school to be built and he supports maintaining and even expanding the number of pre-kindergarten seats in the district. Another of his priorities, he said, was to return the district back to local control. The district has been under the  supervision of the State Board of Education and Education Comissioner Johnny Key since January, 2015.

The LRSD will discuss its budget plans at several forums for community members from various board zones  in the coming days. A schedule of the meetings can be found here.