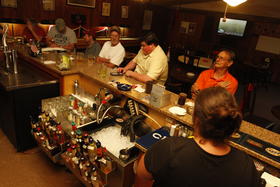 Pride Day at American Legion Post 114 in Batesville looked a lot like a Tuesday. By mid-afternoon a handful of regulars sat at the bar sipping cold beer and ice water, telling lawyer jokes and staring absently at a Law and Order episode.

Few who weren’t Legionnaires or regulars at the Post 114 bar visited the post. DJ Michael Thompson, who was there to spin tunes in the adjacent hall, sat at the end of the bar flicking a cigarette and reaching for his cold mug of beer.

The post’s first Pride Day celebration was Collin Brown’s idea. The 45-year-old is a regular but not a veteran or Legionnaire.

“We have service men and women currently in our military who are openly gay and lesbian, bisexual. We have veterans, many of whom served our country at a point in time when our country didn’t serve them back very kindly. And it’s time a thank you was said.”

All around The Fox Hole, regulars call it, red white and blue bunting hangs from lights and chair backs, but no rainbow flags. 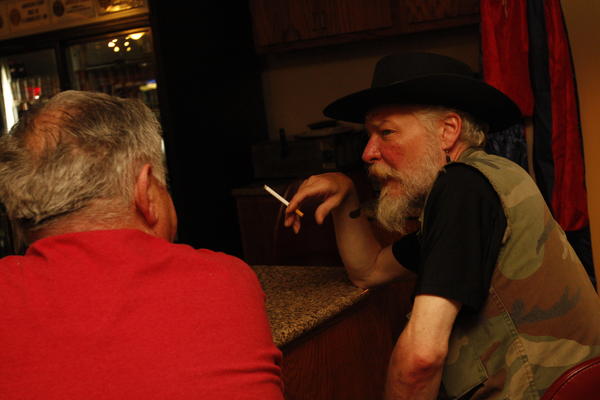 “Yeah, I think folks here at the Post – some folks – might be freaking a little bit because they’re thinking that we’re becoming something that we’re not," Brown said. "And I thought it was really important that we not misrepresent what the Legion is about. That’s why you don’t see any pride flags up around here. You don’t see the rainbow colors. Folks can wear them in if they want, great, but we are an organization about serving and supporting our servicemen and women and our veterans.”

Brown said the turnout was sparse. A gay-rights lawyer stopped by, as did a person who identified as gay, but there wasn’t much of a mingling of new veterans, straight or gay. “But we actually had a bigger crowd Tuesday than we’ve had in quite some time.”

Brown himself was approached by someone from the Moose Lodge, he said, who asked if he’d be interested in putting on a similar event at their lodge.

“We didn’t do anything that we don’t do every day, but we did talk about a lot of things we don’t normally talk about," Brown said.

There are 14,000 American Legion posts around the country, said John Raughter, a spokesman for the national office in Indianapolis. These posts are autonomous, and as such, Raughter had no comment on Post 114’s Pride Day event. He directed inquiries to the state-level officers.

Doyle Batey, the deputy adjutant for Arkansas, said the state office in Little Rock wasn’t made aware of the event before news stories broke. But, he said, “veterans today come from every walk of life,” and he isn’t unsupportive.

Post 114 commander James Olsen said the day was all about recruiting new members if possible and, maybe, changing the public perception of the Legion.

“Basically, you know, we’re trying to get more members in here, let people know we are out here to help veterans, support veterans, and we came up with the idea, but this is to support all veterans,” Olsen said.

“There’s a lot more open-mindedness here,” Brown said, “and a lot more conversation that goes on that people would be really surprised to find out about. One of the folks here who comes here regularly is open about being an atheist. That’s a pretty brave thing to do!”