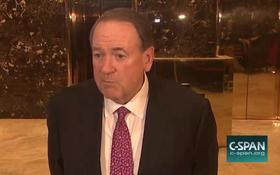 When Huckabee arrived at the tower he said he was there “just getting Starbucks.” Huckabee may be in line as President-elect Donald Trump’s U.S. Ambassador to Israel. Both the UK Daily Mail and the Jerusalem Post are reporting that officials in the Trump transition team are indicating Huckabee will get the job.

As he left the building, Huckabee revealed few details of his visit and declined to tell reporters whether President-elect Donald Trump has chosen him for a post in the new administration.

“It’s his job to make the decisions and whatever decisions those are, it’s not for me to disclose,” Huckabee said in a video captured by C-SPAN.

“I’m going to serve my country inside or outside of the government. And I’m going to be loyal to Donald Trump because I believed in him as a candidate, stood by him throughout…I didn’t come here looking for a job and I did not campaign for him because I was needing work.”

Huckabee may be in line as President-elect Donald Trump’s US Ambassador to Israel. Both the UK Daily Mail and the Jerusalem Post are reporting that officials in the Trump transition team are indicating Huckabee will get the job. 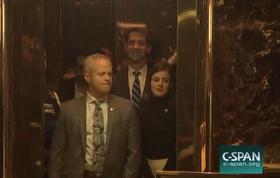 Once a Baptist minister, Huckabee has made several trips to Israel over the years. He was elected Arkansas lieutenant governor in 1992 and assumed the governor’s role in 1996 with the resignation of Jim Guy Tucker. He was reelected twice, leaving the office in 2007.

The Republican made two unsuccessful runs for his party’s nomination for president in 2008 and 2016. His daughter, Sarah Huckabee Sanders, worked on the Trump campaign.

Sen. Cotton did not speak to reporters in the building’s lobby, but he was seen smiling as he entered the elevator on the first floor. Cotton has been mentioned as a possible pick for U.S. Defense Secretary in the Trump Administration.

The appearances of Cotton and Huckabee come a day after Arkansas Attorney General Leslie Rutledge also met with the President-elect’s transition team. On Thursday, Rutledge had several meetings at Trump Tower lasting  about an hour and a half , according to her spokesman Judd Deere.