Arkansas Ticks Make Us Sick, But Always, And All Ways, Remains A Question 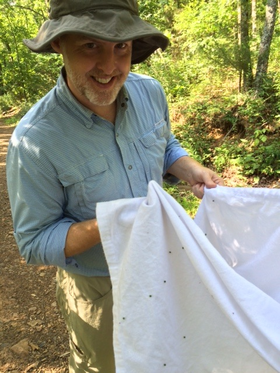 This summer, Arkansas is fighting back.

Back against a population of blood-sucking ticks that’s abundant, active and virulent.

Scientists from a half dozen state agencies and institutions have banded together to target these tiny terrors, not for termination but for a count, a dissection at most.

That’s because Arkansas is host to the largest number of blood-sucking tick species in the United States. The diseases they spread can be debilitating, even deadly.

While crunching through the dense understory, Dowling says ticks perch on the tops of shrubs and plants, poised to hitch a ride on passersby-- deer, raccoons, birds, rodents, dogs, and of course, people.

He stops for a moment to examine the cloth.

“So these appear to be dog ticks,” he says, holding the flannel up for inspection.

He snags one trying to crawl away and seals it in a plastic tube for genetic and bacterial testing back at the lab.

“The main tick we collect is the Lone Star tick, which is most common in Arkansas. Of a hundred ticks I pull off my clothes after sampling out in the woods, ninety-nine percent will be Lone Star ticks.”

Dowling says the Ozarks Plateau in particular is a refuge for a great many native Arkansas species, but the tick diversity is especially high, perhaps because of the abundance of hosts such as white-tail deer, almost extirpated in Arkansas in the early 20th century, now rebounded to healthy, even abundant numbers.

Breeding females can lay as many as 10,000 eggs before dying. These eggs hatch tight pods of “seed” ticks that also quest for blood.

Dowling characterizes being physically infested with seed ticks as something fit for a 50s Hollywood horror flick.

“They appear to be just a dark spot of dirt on your clothing, but quickly spread out, crawling everywhere.”

Tick-wary rural residents keep duct tape around to efficiently remove seed ticks. American dog ticks, lone star ticks and adult blacklegged ticks, commonly called deer ticks, are plentiful in the state. Reported cases of Rocky Mountain spotted fever and ehrlichiosis, transmitted in Arkansas by lone star ticks, have spiked over the past decade. An expert tick wrangler, Ashley Dowling himself has been struck down by ehrlichia.

“During the course of a month I was intensely fatigued,” he says. “But when a severe headache persisted, I went to my doctor. Turns out I had a 104 fever and it was rising.”

A course of antibiotic doxycycline soon quelled his symptoms.

That bite by an infected tick helps spur his research, though, and today he’s embarked on a novel citizen-science initiative.

This summer Dowling distributed a thousand tick collection kits to the public through local outfitters and farmers markets. So far he’s gotten several dozen kits back, and demand is brisk.

Dowling is especially interested in blacklegged ticks, which are less common in Arkansas but a known vector for Lyme disease primarily in northern and northeastern U.S. states.

“Blacklegged ticks emerge in late summer and fall,” he says. “And are active on the Ozarks through winter.” The presence blacklegged ticks concerns research scientists because an increasing number of Missouri and Arkansas Ozarks residents are being diagnosed with Lyme disease. Among them is Fayetteville resident Jane Steinkraus.

“I know I got this in Arkansas,” she says. “I had been working outside in the woods in the spring, cutting down red cedar brush. I got covered in ticks. I thought I had removed them all. I found one embedded on my leg. Weeks later I experienced episodes of fever, shaking, and exhaustion. My joints ached. My doctor prescribed doxycycline, which worked for awhile. But the sickness returned – with a vengeance.”

Steinkraus, a Yale-educated nurse, believes the tick-borne bacterium which causes Lyme disease, Borrelia burgdorferi, rests and regroups in the body when under siege by, for instance, a single courses of antibiotics. This is why Lyme is associated with intense relapses.

She eventually sought help from what she refers to as a “Lyme-literate” specialist, a Missouri M.D. He prescribed a year-long course of four different drugs – Ceftin, Biaxin, Plaquenil and Tazicef. Steinkraus also credits self-administered apitherapy, a novel alternative treatment.  “I feel almost normal again,” she says. “The experience was extremely traumatic. I try not to think about it anymore.”

Jane Steinkraus is not alone. Dozens of Arkansans now report being testing positive for Lyme. Lyme disease has been confirmed by the Centers for Disease Control in more than a dozen states but not Arkansas. The federal agency maintains strict multi-level, time sensitive diagnostic and reporting protocols, which a rising number of Arkansas cases apparently do not meet.

Early research by U.S. military scientists indicate the bacterium Borrelia burgdorferi, a corkscrew like pathogen, is taken up by blacklegged ticks in Southern ecosystems that feed primarily on the blood of small rodents. But because Borrelia burgdorferi is rare in Arkansas ticks, University of Arkansas for Medical Sciences microbiologist and immunologist Jon Blevins and his colleague, toxicologist Jay Gandy, are researching alternative causes.

“We are looking for species of Borrelia that are known to cause disease in humans by collecting ticks and seeing what we can find,” Jon Blevins says.

Blevins believes an unknown Borrelia bacteria might be incubating in Arkansas ticks.

Like Dowling, Blevins and Gandy have started to collect tick species from around the state for identification and analysis, looking for novel Borrelia characteristics. They plan to coordinate bench work with Dowling.

The UAMS and UA-Fayetteville tick teams are also working in concert with the Arkansas State Health Department.  The agency maintains a tick information website with links for healthcare professionals and the public: tick facts, tick disease prevention, and how to report tick bites and infections. The agency logs cases of common tick diseases in the state year by year, including the lesser known diseases babesiosis, anaplasmosis, tularemia, and STARI—Southern tick-associated rash illness.

In the South ticks have also been found carrying deadly viruses like the recently identified Heartland virus and Bourbon virus, associated with killing several residents in Missouri and Oklahoma. All of which concerns state public health veterinarian Dr. Susan Weinstein.

“Arkansas is a hotbed for tickborne disease in the nation,” she says. “So I’ve asked all our county environmental specialists to sample for ticks. We are also collaborating with Arkansas Game and Fish field agents, who are collecting ticks for us as well. And many veterinarians have volunteered to collect ticks from their patients.”

Within a year or two, after all the ticks are identified and pathologies tabulated, scientists will have a clear map for Arkansas medical and residential communities to reference – a map illustrating geographic densities of ticks, species diversity, and by extension, human exposure to their associated diseases.