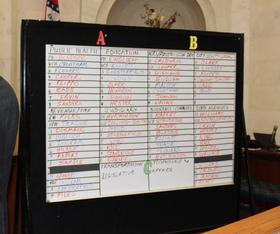 At the Arkansas Senate’s orientation Wednesday, a rule was adopted that prevents members of a minority party from taking a majority of seats on any of the chamber’s standing committees.

The rule requires at least five members of a majority party and no more than three members of a minority party to have seats on the Senate’s nine standing committees, which typically consist of eight members. It was adopted before Senators picked their committees for the upcoming session. Preference in committee picks is based on seniority.

Senate Majority leader, Republican Jim Hendren of Gravette introduced the new rule. He said it was an “attempt to accurately reflect the elections of Arkansas in a fair way.”

“I’ve been in the minority party when we had less than 30 percent representation and you can still get bills out and this is not an attempt to prevent that,” said Hendren.

Republicans in the Arkansas Senate gained two seats in the election and now control 24 out of 35 seats. The Senate rule passed easily along party lines, but not before some Democrats, including Sen. Linda Chesterfield of Little Rock, spoke against it.

“The public also needs to know this is about one committee,” Sen. Joyce Elliot (D-Little Rock) said. “And I’m not going to pretend I don’t know that. This is about the education committee.”

During committee assignments, Elliot took a place on the Education Committee as vice-chair, joining two other Democrats, Chesterfield and Sen. Uvalde Lindsey of Fayetteville. The committee will be chaired by Sen. Jane English (R-North Little Rock).

The committee rule’s adoption comes about a week after Democrats in the Arkansas House of Representatives took a slim majority on the Revenue and Taxation Committee, despite only holding 26 out of the chamber’s 100 seats. The action riled some state Republicans, like Lt. Governor Tim Griffin, who took to social media to criticize the move.

The taxation panel could have an influence on any tax cut proposals that come through next year’s session. Gov. Asa Hutchinson has proposed a $50 million tax cut in his budget and Sen. Bart Hester (R-Cave Springs) has proposed a $106 million tax break that would apply to both low and high income earners.

Despite the early rankling over the Senate’s committee selection rules, Democratic Sen. Larry Teague of Nashville, who was elected again to his post as chairman of the influential Joint Budget Committee, took to the Senate floor to deliver a unifying message.

“I am convinced that when we cease to work together, we’ll cease to take care of the people of Arkansas,” Teague said. “I think that that is the greatest asset that this body has. It’s the fact that we’re friends. When we go in the back room, we laugh and we joke and we talk. It’s OK to disagree. Disagreement’s part of the process. But I want us to stay focused on: we’re all here for the same reason and that is to look after the people of Arkansas.”

Also Wednesday, two new members of the Arkansas House were sworn in and given committee assignments. Democratic State Rep. LeAnne Burch of Monticello and Republican Rep. Jack Fortner of Yellville were sworn in. Both were elected in special elections this year.

The 91st General Assembly will officially convene for the session on January 9.