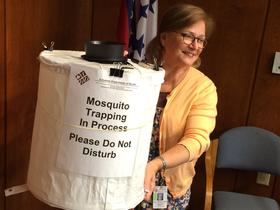 Public health officials in Arkansas and nationally are monitoring the spread of the Zika virus following the births of thousands of babies with microcephaly.

It's a defect marked by underdeveloped brains and deformed skulls, in South and Central America, and the first such birth late last month at Hackensack University Medical Center in New Jersey.

In Arkansas this month, about 45 new German-built Biogents Sentinel mosquito traps will be added to the 20 or so already installed throughout the state. It’s phase 1 in the state’s effort to build a profile of two newly famous mosquitoes – Aedes aegypti and Aedes albopictus, the species blamed for spreading the Zika virus.

“This mosquito is an urban mosquito,” says Dr. Susan Weinstein, the state’s public health veterinarian. “It’s not a rural mosquito, it’s not a flood water mosquito or rice field mosquito. … It lives right around our homes.”

The first such trap was hung just outside the Arkansas Department of Health’s headquarters on Markham Street in Little Rock, and “someone thought that it might be some sort of a bomb and called police.”

These traps look like an oversized paper lantern. A pheromone lure draws mosquitoes into a funnel at the top, where they’re caught in a mesh net inside. The drag of an electric fan below traps them.

Weinstein says she doesn’t know how many of Arkansas’s mosquitoes are Aegypti and Albopictus “because nobody’s done this surveillance for 40 or 50 years.”

“The data is extremely old, and that’s why we started to try to gather this, so we can know. We’re pretty certain that Aedes albopictus, which is sometimes called the Asian Tiger mosquito, we’re pretty sure that’s everywhere in the state and in pretty good numbers. Aedes aegypti, which is a little bit better vector for these diseases because it prefers to bite people – it pretty much only bites people.”

In epidemiology, a vector is a path for infection to spread. Aegypti is a stronger vector for Zika, but Albopictus, she suspects, is more populous.

But the mosquito isn’t the only vector for Zika transmission. There’s also the human male.

“Strangely enough, the virus can concentrate and persist in semen for extended periods of time, so because of that, sexual activity remains a risk factor for as long as six months after infection,” says state epidemiologist Dirk Haselow.

The Center’s for Disease Control as well as the Arkansas Health Department are warning men who’ve visited Zika outbreak areas and have symptoms to abstain from unprotected sex for six months.

People infected with the Zika virus may get rashes, conjunctivitis or mild fevers within a few days, but for adults, Zika’s symptoms are typically slight. Most people don’t report any symptoms. After three weeks, a carrier probably won’t spread the virus if bitten by a mosquito, Haselow says.

“If we weren’t talking about birth defects, if Zika didn’t cause birth defects, nobody would even care,” he says. “It’s a mild virus we wouldn’t even develop tests for.”

Zika has been implicated in thousands of cases of microcephaly elsewhere in the hemisphere. Microcephalic babies are born with underdeveloped brains and skulls.

Haselow says a pregnancy is at risk for Zika-related complications at any point, not just the first trimester.

So far only a handful of Arkansans have tested positive for Zika, and all contracted the virus while traveling. About 50 more suspected cases have been ruled out.

The Health Department hasn’t diverted substantial resources toward curtailing a Zika outbreak, but all of that would change if just one Arkansan tests positive for Zika without having traveled.

“A single locally acquired case would garner an intense attention,” he says.

The Health Department expects a shipment of 45 more traps this month, bringing the total closer to one for each of Arkansas’s 75 counties.