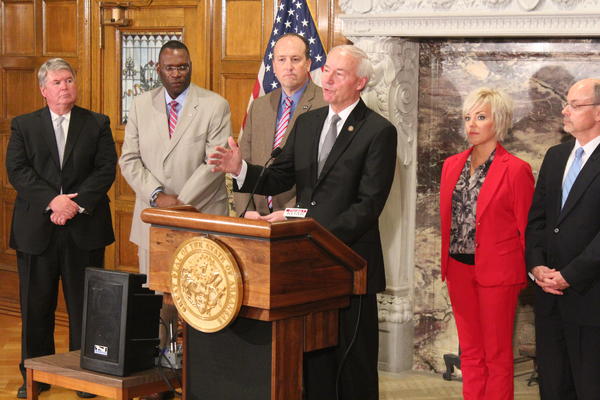 Arkansas Gov. Asa Hutchinson on Monday proposed keeping higher education funding flat next fiscal year but vowed to back a $10 million increase in 2018 if lawmakers support a plan to tie money for colleges and universities to factors such as degree completion.

The Republican governor said he'll call for increasing higher education funding in the fiscal year that begins July 1, 2018 if the Legislature approves the plan to move away funding from a model based on enrollment to "productivity." The state's colleges and universities received about $733 million in the $5.3 billion state budget that was approved earlier this year, and that funding would not change in the fiscal year that begins July 1, 2017 under Hutchinson's proposal.

The state Higher Education Coordinating Board in July approved the framework, which calls for linking schools' funding to factors such as number of students completing degrees, how many graduates get a job or another degree, and how long it takes a student to graduate. The model is aimed at increasing the number of Arkansas residents with degrees.

"The current funding formula for higher education is outdated, it is not really being followed at all in terms of the allocation of funds in our state and it rewards numbers and enrollment versus attainment, goals and efficiencies," Hutchinson said. "It is time for that to change."

State Higher Education Director Maria Markham said the legislation going before lawmakers next year will lay out the framework for the new funding, but not a specific formula. She said the specifics of the formula will be finalized by the Higher Education Coordinating Board if it's approved by legislators. Markham said the model would cap any increases or decreases to an institution's funding at 2 percent from the previous year's level.

Markham said Hutchinson's commitment to increase funding helps ease concerns from some university and college leaders about the new model.

"I think there have been a few that have reserved support until they knew there was going to be new money because they thought without new money you're just taking from one group and giving to another group and that was not something they were ready to support," she said.