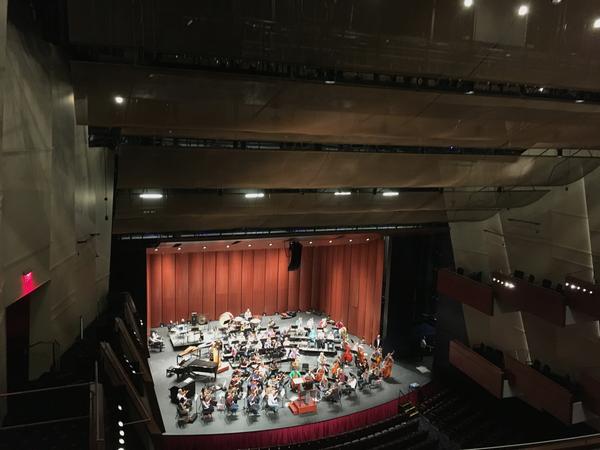 The first performance at the newly renovated Robinson Center Performance Hall will take place Saturday. A key goal of the $70 million project has been to improve the acoustics of the Little Rock-owned venue that was built in 1939. Those attending the show by the Arkansas Symphony Orchestra will get to judge for themselves.

On Thursday, a consultant worked with the full orchestra during an acoustical tuning rehearsal to decide where each musician should be placed and what modifications to make with new components of the hall that can be tweaked. While science and technology are important parts of such a renovation, the human ear is still critical in making decisions about what sounds good. 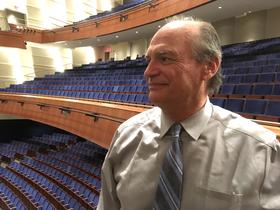 For a couple of hours Mark Holden, CEO of Jaffe Holden Acoustics, drifted around slowly, listening in different parts of the hall as the orchestra performed various types of works. His firm, based in Norwalk, Connecticut, is renowned for its work on venues around the world.

At the touch of a button, Holden made adjustments to high tech features that can change how the hall sounds for different types of performances. Modifying the angle of panels or moving drapes that are on tracks impact whether sound is reflected or absorbed.

"Up in the ceiling there’s over 10,000 square feet of acoustic draperies and baffles which can be tuned for the various different performances in the room," he said. That means adjustments can be made that benefit the sound of a symphony, while an amplified performance like a rock concert or touring Broadway production will be set a different way.

"They’re all on motorized control, they’re all on a touch screen control system and are set for presets. So for example, it can be set from very live and reverberant and enveloping warm rich sound for symphony to a tight, controlled, very intimate clear sound for amplified events and everything in between," Holden said.

His firm was brought in to assess Robinson Auditorium as renovations were first being considered in 2010. Little Rock voters approved funding the project in 2013 by rededicating an advertising and promotion tax.

"I think it served well for many, many years and I think what happened was the bar got raised from the acoustic quality and the visual quality, the sense of intimacy and connectiveness that we now expect.”

After being gutted, the rebuilt interior features a stage that was dropped 36 feet into what had been a lower level convention space. That has allowed the venue to be taller and more narrow, which Holden says is better for sound. Instead of one balcony, there are now two, which are designed to be acoustically transparent.

ASO Music Director Philip Mann has also been very involved in preparing the acoustics and says he’s extremely happy with the finished product.

"My first response, hearing the sonic experience, the acoustic experience, is this is a dramatic, dramatic improvement over the former Robinson," Mann said.

While he was conducting the orchestra for much of Thursday's rehearsal, he too spent time wandering around listening as Associate Conductor Geoffrey Robson led for many songs. On the first balcony, he said, "hearing things upstairs right now, we have a fullness of sound, there’s immediacy and a definition. I think we’re going to keep tweaking it through the week, but we have the makings of a very fine concert hall.”

Key during Thursday's rehearsal was determining how the orchestra should be arranged, which Holden said during a break in the session, was falling very close to their calculations.

"We've learned some of the best positions for the musicians, which instruments should be on risers, which should be flat, what are the settings for the acoustic drapes in terms of controlling the reverberation time, the energy, the lateral energy, their early decay times," said Holden.

Mann said the additional options that can be adjusted, including the orchestra shell, will further enable the orchestra to modify their sound to the benefit of the audience.

"We can take away or add reverb time, so we can make the hall in a sense dryer, or in a sense wetter in terms of how long the sound lasts in the space before it dissipates," Mann said. "So we’re really doing what any musician might do while trying out a new instrument. You might put new strings on it, maybe a different setup or maybe just exploring what’s possible in the hall and that will inform our future decisions as we keep playing different programs, different repertoire in this hall.”

This weekend’s performances are designed to showcase the versatility of the new Robinson Center.

After being involved in similar renovations or construction projects around the world, Holden praised local officials for how they’ve led the renovation.

"They’ve put acoustic quality at the top of the list in terms of the criteria for the building and they’ve never pushed me to compromise and they’ve never asked me to back down from standards that we set in the very earliest (stage), so they’ve been wonderful to work with."